Things I know to be true about Louisiana-

2- Titular territory  in Thomas Jefferson’s grand land acquisition from the French, circa 1803.

3- About as exotic and far away from Columbus as one can get without the requirement of a passport.

Finally, and most importantly, Louisiana is the native home of one of my favorite Columbus citizens, Lynn Leonard, formerly of Lake Charles, Louisiana. Lynn has that confident and polite bearing of a real Southern gentleman, a 21st-century incarnation of someone from a Mark Twain short story. He is possessed with a brand of culturally engrained hospitality that while seemingly foreign in its application,is at such ease in its execution as to appear totally natural. In other words, Mr. Leonard makes good manners cool.

Lynn also has great stories, marking him as the ideal dining and drinks partner. He has lived many lives (though you’d never know it by his youthful and energetic face); he has sailed the seas, spun pre-dubstep house and techno as a nightclub DJ, surveyed the country as a long haul truck driver, worked on grand oil rigs and refineries, and owned a record store before High Fidelity made it cool. All of this results in the kind of personal narratives and anecdotes that prove invaluable at a dinner party. So imagine my elation when I was recently invited to his home to sample some delicacies recently returned from his homeland. Here is what I learned:

Tiger Sauce, Where have you been all my life?

Our dinner started, as many meals are apt to do, with an appetizer of cheese and crackers. Cream cheese to be more precise. Cream cheese topped with a with what appeared to be a thin, dark red liquid, that upon further inspection turned out to be hot sauce. According to Lynn this wasn’t any ordinary hot sauce, oh no. This, my friends, is the hot baby of the bayou known as Tiger Sauce.

The flavor is like a more mature, deeper version of Tabasco. Spicy but not so hot that you can’t discern any of the other flavors, topped with a nice vinegar note. What really impressed me was the color, a deep redish brown hue that looked great on the stark white of the cream cheese. The entire dish reminded me of a favorite from my house as a kid, that perennial cocktail-hour classic of cream cheese and pepper jelly. This homey, less William-Sonoma version would be perfect for entertaining unexpected guests and it pairs great with an ice cold beer.

As expected, this first cajun course was paired with an equally cajun tale. It started with the planned execution of a chicken for Sunday dinner and ended with an accidental gunshot wound to the stomach.

Of course The Fox, in all of her mixological wisdom, was prepared with the perfect drink for the occasion, one she called Cajun Lemonade.

Cajun Lemonade, perfect for washing down some Tiger Sauce!

The recipe is simple:

Combine equal parts Pimms with white rum and two parts lemonade and thinly sliced lemon wheels. Serve over ice and top with a dash of hot sauce and Mexican 7-UP. Garnish with lemon.

The result is a sweet, but not too sweet cooler with a hint of heat and the perfect amount of fizz from the soda. Definitely my new go-to summer-time part drink! Perfect for whipping up a pitcher and sharing with friends around the pool or BBQ.

The next offering in Lynn’s culinary Tour de Louisiane was as delicious as it was unexpected. Presented on their own, simply and without any accoutrement, our second course appeared to be small, pan seared sausages. Their ordinary appearance masked their novelty, both in texture and flavor. Allow me to introduce: boudin.

Pronounced boo-dan, this catchall term literally means sausage, and can refer to a wide range of pork based meats in a natural casing. The cajun boudin blanc is a smoked pork sauce that has the addition of eggs, some dairy and rice. This results in an incredibly delicate texture that falls apart in your mouth. The smoke is stronger than european sausages of the same ilk and the seasoning stronger. Ours were served without any traditional garnish or side sauces because they simply didn’t need them. Lynn’s pick for the best boudin, and the one we were lucky enough to try, comes from Rabideaux’s Sausage Kitchen, also of Lake Charles.

In between bites of spicy cheese, smokey sausage and sweet lemonade we managed to make room for another swampland libation, this time in a slightly less adulterated form. 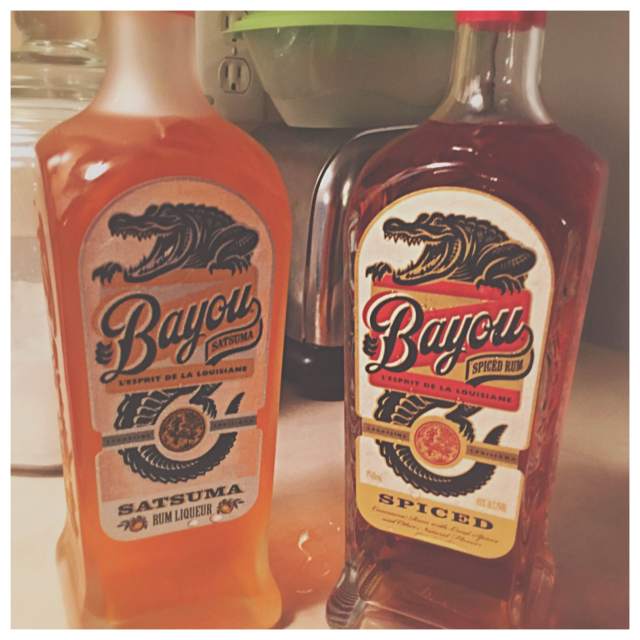 The spiced rum tastes like Captain Morgan after he’s spent a long weekend in the French Quarter, but its the satsuma that’s really special! Imported by the Jesuits to “New Spain”, the satsuma (citrus unshiu, tangerine) was traditionally grown north of New Orleans. From there it found its way into rum, which in turn found its way into my glass. (What a world!) The result is a sweet and tart combo that is delicious when served chilled, preferably in the company of something spicy.

Our final dish, the entree for the evening, was the one Lynn was most excited for us to try. This dish was actually the impetus for the entire evening, and our invitation went something like this:

Come over. Bring the lady. I’ll make up a stuffed chicken!

My interest surly wasn’t piqued by the name; stuffed chicken, it souned so generic. Mom’s make stuffed chicken for Sunday dinner when they aren’t feeling too terribly inspired. But something in Lynn’s voice belied his excitement; he sounded generally hungry for whatever this banal sounding bird could be. (I puzzled over what stuffed chicken could mean. What was it stuffed with? Was this a normal chicken? Was this some sort of swamp dwelling super bird? Perhaps “stuffed chicken” was just a bad translation of some sexier creole word. One could hope it actually meant something more exciting than poultry filled with breading.)

So imagine my disappointment when we arrived and stuffed chicken turned out to be just that. Chicken. Chicken that had been stuffed…zzzzzzzzz. Somebody wake me up for dessert, because I’m going to assume that stuffed chicken, even by way of Louisiana, is just as boring as her midwestern cousin.

But I was wrong. So, so wrong.

And I didn’t even get a picture. Because it didn’t look all that special. (It looks like a whole roasted chicken.) And I probably wasn’t going to write about it, so why take a picture? And because it probably won’t be that good. And because I’m a dick. And, because karma is real, it turned out to be so delicious, that by the time I decided to snap a picture, we had already ravaged the poor girl beyond recognition.

And here is the funny part. I’m not even sure what it was that made this stuffed chicken so much better than all of the other stuffed chickens that had preceded it. It was stuffed with a cornbread stuffing and roasted. That’s it. But I’ll be damned if it wasn’t some of the best chicken I’ve eaten in my life!

So what did I learn? First, never judge a chicken by its cover. Two, we should be turning all of our tigers into sauce and putting that sauce on cream cheese. Three, if you happen to have some of that illicit tiger juice, combine it with lemonade and booze for a fun summer beverage. If that booze is from the bayou, even better.  Four, boudin isn’t the sole domain of Ray Finkle’s mother. (If anybody gets that joke, I’ll give them some of the rum and hot sauce I made off with…)

And lastly, if you get the chance, be like my friend Lynn. Be kind. Open your home up to your friends and share the food that you love. Be just as free with your stories as you are with your wine (or in his case, rum). Do these things in the spirit of friendship. Take a tip from your southern neighbor and sow the seeds of hospitality. For when you do you’ll reap the harvest of a life well spent, I gawr-on-tee!